When it comes to the body horror genre, nothing can match the legend that is Canadian filmmaker David Cronenberg. “The Fly”, “Dead Ringers”, “Videodrome”, “Crash”, “Naked Lunch”, “Scanners”, “eXistenZ”, “Rabid”, “Shivers”, – from the late 1970s to “eXistenZ” in 1999 he made many strange and wild works.

Over the past twenty years, he has played more straightforwardly with such well-known dark genre dramas as “A History of Violence,” “Eastern Promises” and “Cosmopolis.” His last directing endeavor, “Map to the Stars,” was eight years ago although he has emerged as an actor in recent years such as his recent recurring screen role in “Star Trek: Discovery.”

Now though he is back behind the camera and back into the pure body horror genre with “Future Crimes” which was just announced as part of the Official Selection of the Cannes Competition next month where it will have its world premiere.

To celebrate the news, NEON has released the first poster and trailer for the film starring Viggo Mortensen, Lea Seydoux and Kristen Stewart. Also, Metropolitan Films has released quite different international teasers – both clips are available below.

Set in the near future, the human species adapts to the synthetic environment and the body undergoes new transformations and mutations.

Together with his partner Caprice (Seydoux), celebrity performance artist Saul Tenser (Mortensen) publicly exhibits the metamorphosis of his organs in avant-garde performances.

Timlin (Stewart), an investigator from the National Organ Registry, obsessively tracks their movements, when a mysterious group is revealed… Their mission – to use Saul’s fame to explain the next phase of human evolution.

NEON has set a US theatrical release for “Crimes of the Future” in June. 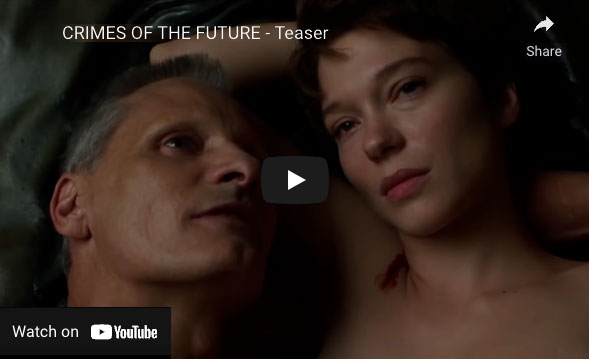 The official teaser image for David Cronenberg’s CRIMES OF THE FUTURE.
Starring Viggo Mortensen, Léa Seydoux and Kristen Stewart.
World premiere in the Competition at Cannes 2022.
Exclusive in theaters this June. pic.twitter.com/Mp8isHHxbS