Just a month ago we got the teaser trailer and today Paramount + surprises with the first full official trailer for Star Trek: Strange New Worlds. We also have a new poster and a first image.

Throughout the week, Paramount + released character promos for the highly anticipated series, all of which led to this new official trailer. A trailer for the trailer will air tonight at the CBS Grammy Awards.

[International fans can watch at startrek.com]

Paramount + also released the official art poster for the series, which debuts in its first 10-episode season on May 5th. Strange poster of the New World

Star Trek: Strange New Worlds is based on the years when Captain Christopher Pike took the helm of the USS Enterprise. The brand new series will include the favorites of the fans from the second season Star Trek: Discovery, Anson Mount as Captain Christopher Pike, Rebecca Romijn as Number One and Ethan Peck as Science Officer Spock. The series will follow Captain Pike, Science Officer Spock and Number One in the years before Captain Kirk embarked on the USS Enterprise as they explore new worlds around the galaxy.

And there are some pictures at first glance. Rebecca Romijn as Una, Anson Mount as Pike and Ethan Peck as Spock Jess Bush as a Chapel 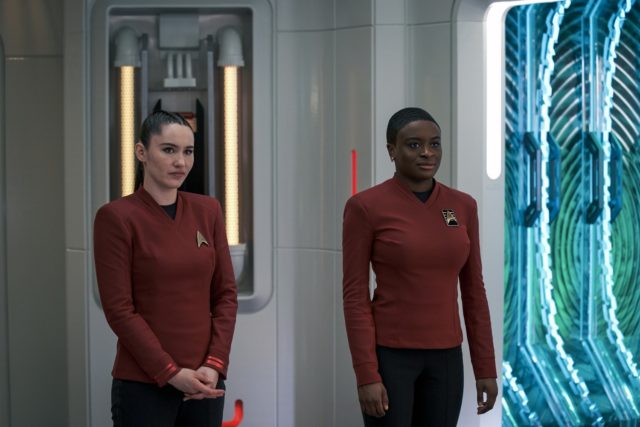 Christina Chong as La’an and Celia Rose Gooding as Uhura

All photos by Marni Grossman / Paramount +

Strange new worlds will be broadcast exclusively on Paramount + in the USA, Latin America, Australia and the Scandinavians. The series will air on Bell Media’s CTV Sci-Fi Channel and will air on Crave in Canada, with additional international availability to be announced later.