Is Prince Harry so hot-tempered, self-absorbed and attention-seeking that he can’t help but stick a knife into the Royal Family?

For all his self-righteous talk of ‘making the world a better place’, no opportunity was missed to destroy the House of Windsor.

Yesterday’s prime-time US TV interview was a shining example. The Duke of Sussex could hardly have been more spicy. He and Meghan, remember, just did the proper thing by flying in to talk to the Queen.

After months of negative publicity, this offered the narcissistic duo a chance to build a bridge before his 96th birthday. 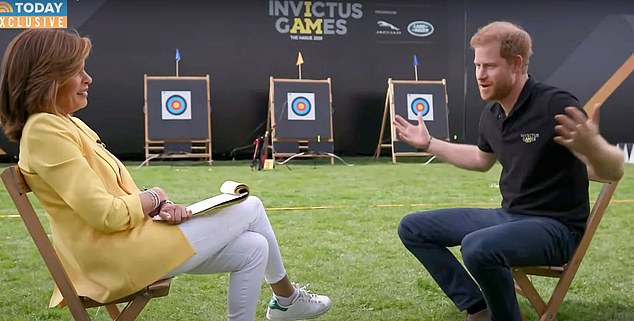 But Harry had canceled his good intentions. In the interview he boasted that he checked His Majesty was protected by the ‘right’ people.

Putting this aside is a derogatory comment about a woman who has guided her country with impeccable wisdom for 70 years.

It was a strange – and ridiculous – insult to Prince Charles and Prince William (whom he also adamantly refuses to say he misses).

While Harry stared at the navel with his California friends who had been awake for two years, they had worked tirelessly to care for him.

When the Queen needed support at Prince Philip’s memorial service last month, they provided it.

And where is the duke for his grandfather’s delivery? In America, apparently unwilling to disturb his busy schedule and sulking at his failed request for police protection in England.

But is anyone surprised by its toxicity? He has previously branded his family racist and accused Charles and the Queen of being dysfunctional parents.

These comments no doubt, inadvertently, added to the potential of Harry and Meghan’s documentary with Netflix, which paid them £100 million.

But in the UK, their stock is sinking faster than the streaming giant. Many find it hard to accept that this thorny, purportedly privacy-loving couple are profiting from the royal family name they blaspheme incessantly.

For them to appear on the royal balcony during the Queen’s Platinum Jubilee celebrations would be disgusting hypocrisy.

Not so long ago, the nation fell in love with Harry, who under public scrutiny went from a confused child walking behind his mother’s coffin to an Afghan war hero who married Meghan, his fairy tale bride.

How sad that dream got worse. Blinded by self-interest and with a lack of humility and disregard for our country and its people, the Duke of Sussex has become the Duke of Grievance and Delusion.

The pearly grip of opponents of Priti Patel’s plans to resettle failed asylum seekers in Rwanda is a sight to behold.

The proposal has been denounced as inhuman, excessive and ungodly. One critic even compared it to the Third Reich.

However, as we noted, a former border chief predicts 100,000 Channel migrants will reach the UK this year in fragile boats.

For trying to save lives while destroying evil merchants who got rich by exploiting the desperate, the Minister of the Interior deserves an applause – not a curse.

Energy companies have for years made huge profits at the expense of depressed consumers.

Now, as gas and electricity bills suck in horror, will companies step in to ease their pain? Do not be stupid.

Instead, they suggest rich families cover the cost of a £1,000 discount for the poorest households.

Central England is already struggling with rising taxes, wage pressures and soaring food prices. Why should they be lied to again?